Following almost six months of negotiations, the combined efforts of the residents of Governor’s Land, James City County and the Williamsburg Land Conservancy have successfully preserved a significant tree buffer (un-timbered frontage along highway) on Route 5, one of the Historic Triangle’s character corridors.

In October 2001, Mr. Raganella signed an agreement with Southern Resources, Inc. to timber the pine trees on his property. In November 2001, when the County learned that the property was going to be timbered, they made contact with Mr. Raganella through his Williamsburg-based broker, Mr. John Bohlman, owner, Bowman Realty. “We expressed an interest in negotiating the purchase of a 25-year conservation easement on his property” said Marvin Sowers, Planning Director, James City County, “and he turned us down.”

In February 2002 the Governor’s Land Foundation was informed that the timbering was to begin and they notified the residents. Concerned about the potential impact of the timbering, a group of residents got together to learn more and better understand the scope of these actions. Finding that the removal of the trees along the highway would significantly impact the ambiance of the corridor, the group set out to find a way to protect the buffer from being timbered. Governor’s Land resident Bill Frymoyer took the lead position in organizing the group’s efforts, and contacted the County to discuss what could be done to save the buffer.

In early March 2002, support for the effort was building. The Historic Route 5 Association, represented by Glen Koehn, was instrumental in building support and communicating the situation to key people that needed to get involved. The residents of Governor’s Land had formed a strong committee and the Governor’s Land Foundation Board of Directors has given their support to the efforts. In mid-March, Frymoyer contacted the Williamsburg Land Conservancy. “The Conservancy is a logical partner to help in these efforts – this is what they are tasked to do,” said Frymoyer.

The County, Conservancy and Governor’s Land committee representatives began meeting together to strategize a plan of action to save the buffer. Governor’s Land Committee members include: Bill Frymoyer; Frank Arlotto; Cynny Given; John Grau; Jim Hay; Bernie Jerlstrom; Doug Myers; Carol Vitarelli; Jack Heslip; and Maida Perkins. The group gave their effort a name that aligned with their purpose – Preserving the Corridor.

County leaders, including Chairman of the Board of Supervisors, Jim Kennedy and Board member Jay Harrison began working with the group. In early April a jointly-signed letter from Kennedy, Brooks LaGrua, President, Governor’s Land Foundation, and Dr. Thomas Powers, President, Conservancy Board of Directors, was sent to Mr. Robert Gollahon, president, Southern Resources Inc. requesting a temporary delay in the timbering of the buffer. The premise of the letter was to give the coalition a chance to negotiate with the landowner on the purchase of a conservation easement. Mr. Gollahon agreed to the delay. It was subsequently learned that Mr. Dicky Dost, owner of Chips, Inc., had purchased the timber from Southern Resource Management, Inc. and would be responsible for the timbering.

Because the landowner had a signed agreement with the timbering company, the coalition quickly realized that there were two issues to resolve before the buffer could be preserved. First, a conservation easement needed to be placed over the proposed buffer to protect the land from being timbered. This could only be achieved if the landowner would agree. Second, if the landowner agreed to the easement, the timbering company would suffer a loss of income on the non-timbered trees in the buffer necessitating repayment of those funds. Bill Apperson, Forester, Virginia Department of Forestry met with members of the coalition to help them better understand the extent of potentially lost revenues on the buffer.

With Raganella’s verbal commitment for the purchase of the buffer, the second issue needed to be resolved. Schumacher contacted Dicky Dost to discuss his company’s lost income for non-timbered pines in the buffer. In early June, Schumacher met with Dost and an agreement was quickly reached. “Harvesting timber is my business,” said Dost, but I think buffers are important – particularly on a scenic highway such as Route 5. I look forward to working with the Conservancy to educate landowners on how they can be preservation minded, while at the same time make a profit selling their timber.”

Following is the financial structure for the acquisition of the tree buffer:

The County had the funding to participate in the deal, as did the Conservancy. However, Governor’s Land had to turn to their residents to raise the necessary funds, and that’s what they did.

Under Frymoyer’s leadership and the committee’s support, neighborhood teams were formed and a door-to-door, personal approach was used to generate support and contributions for the Conservancy. In three weeks, over $35,000 was raised by the residents to protect a buffer close to their neighborhood. The Conservancy has been asked by the Governor’s Land residents to designate any excess funding for continued work in preserving buffers along the Route 5 Corridor.

Since his initial verbal commitment on May 30, Mr. Raganella has spent the past months exploring possible development scenarios for his property. This process helped to
finalize language for the final Agreement and the Deed of Conservation Easement, which is the legal document that will be filed with the Clerk of Court. David Otey, Jr. is Mr. Raganella’s attorney and Conservancy Board member, Andy Bradshaw, has represented the Conservancy’s interests.

Anticipating that the transaction would be completed last July, the Conservancy Board of Directors held a special meeting on June 27 to formally approve the purchase of the easement. However, the landowner did not sign the agreement until September 5th.

The final step in the process leading to settlement is for the Board of Supervisors to approval the purchase through a Resolution. The item has been placed on their September 10th meeting agenda. The Supervisors will go into Executive Session to vote and their decision will become public following the session.

“I am personally pleased with the results of the coalition’s efforts,” said Kennedy. “I hope this will serve as an example of how groups can work together in future preservation projects throughout the county,” he said.

Mr. Bohlman and Mr. Raganella are also pleased that the deal has finally come together. “As a Williamsburg resident, I understood the importance of preserving the buffer from the very start of the negotiations and I encouraged my client to participate in the deal,” said Bohlman. “Once Mr. Raganella visited Williamsburg last summer, he too, was convinced that saving the buffer was an important and prudent effort,” he continued.

Over the summer, other timbering has taken place along Route 5 near Governor’s Land. Across the road, two landowners, Gil Granger and Trohson Corporation, voluntarily included tree buffers in their timbering agreements and left 25-ft. canopies along their property and only did selective harvesting of timber in the next 75-ft.

Along Route 5 on the same side of the road as Mr. Raganella’s property, the Williamsburg Pottery Factory owns a 26-acre pie-shaped piece of land that is literally nestled within Mr. Raganella’s land. It was the Factory’s plan to clear-cut (remove all timber) their property last July. However, prior to making a final decision, Scott Hawkins, president of the Pottery Factory contacted Schumacher to discuss his company’s potential plans.

Ultimately, Hawkins made the decision to leave a 200 ft. tree buffer on the front part of the property within view of Route 5 and a 25 ft. tree buffer on the backside of the property adjoining Governor’s Land. As a third generation landowner, Hawkins’ family, the Maloneys, have taken care of land in the Historic Triangle all of their lives. “We don’t want to see pavement on every square inch of land,” said Hawkins. “I’m a Williamsburg resident and believe all of us have a responsibility to take care of where we live,” he said.

There is much more work to be done to preserve the character corridors of our community, and the County will continue to work proactively with the Conservancy and other citizen groups in these efforts.

“Governor’s Land has set an example of what can be accomplished when a community comes together for a common purpose and cause,” said Dr. Thomas Powers, President, Conservancy Board of Directors. I think the words of Margaret Mead say it best,” he continued:

“Never doubt that a small group of thoughtful, committed citizens can change the world. Indeed, it’s the only thing that ever has.” 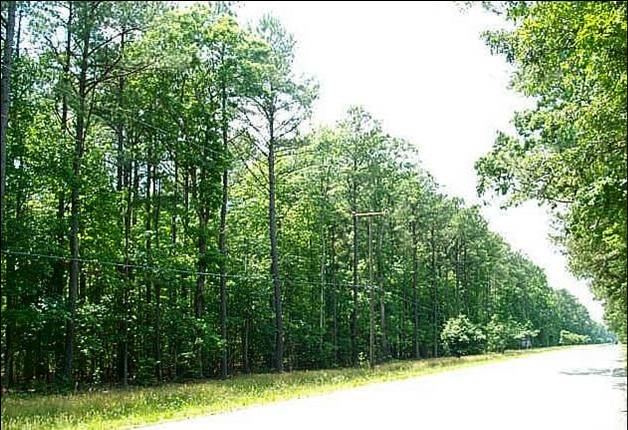